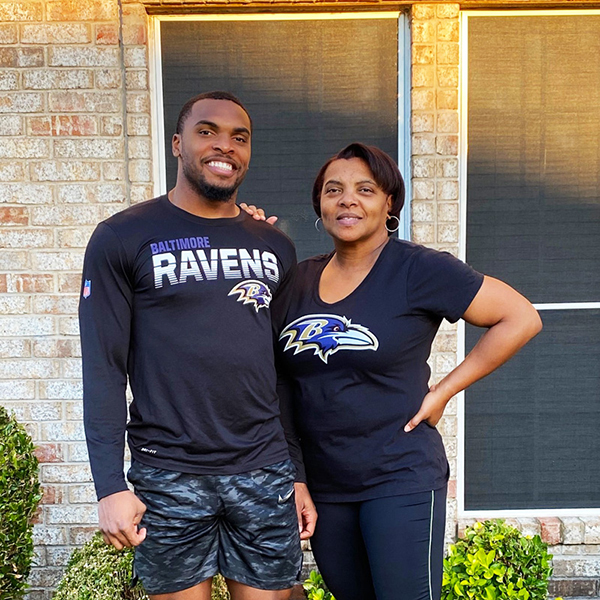 Congratulations are in order for our Dallas Office Manager, Rozena Duvernay, and her son, Devin Duvernay! Devin was selected as a third-round draft pick by the Baltimore Ravens in the 2020 NFL Draft!

During his four-year collegiate career, Devin played wide receiver for the University of Texas Longhorns appearing in all 52 games and starting in 30 games. ESPN analyst, Louis Riddick, describes him “as a guy that can absolutely fly,” which is evident when considering his career stats. In his senior season, Devin caught 106 passes for 1,341 yards and nine touchdowns recording the second-most receptions and receiving yards in school history. In the same season, he also led Big 12 receivers in catches, catches per game, receiving yards, and receiving yards per game.

Devin didn’t only see success on the football field, but off the field as well graduating in December 2019 with a degree in Sports Management.Some of his academic accolades include being named to the National Football Foundation (NFF) Hampshire Honor society, being a three-time Academic All-Big 12 selection, and being a five-time member of the Big 12 Commissioner’s Honor Roll.

Devin is also cousins with former Heisman Trophy winner and current Arizona Cardinal quarterback, Kyler Murray. The family is full of superstars and we’re a witness to it here at Jordan & Skala Engineers every day having Rozena serve as an office manager for our Dallas office throughout the years. We’re extremely proud of all the Duvernay family’s accomplishments and we wish Devin much success in the NFL!